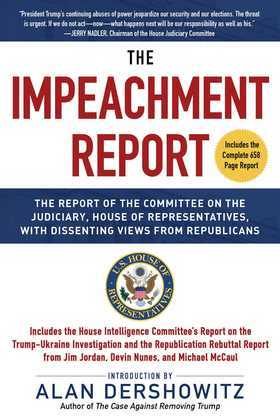 This groundbreaking report—released by the US House Committee on the Judiciary, chaired by Jerry Nadler—contains the results of the impeachment inquiry into President Donald Trump’s actions as he sought for Ukraine to announce investigations into Hunter Biden, as well as an explanation of the committee's process and its justification for recommending two articles of impeachment against Trump, abuse of power and obstruction of Congress.

This new report, separated into four parts, details the process by which the House Intelligence Committee investigated the case against Trump. Part Two is dedicated to examining the standards of impeachment laid out in the Constitution. Part Three delves into the proof and details of the Democrats' case that Trump abused the power of his office to pressure the Ukrainian government to investigate his political rival and interfere in the 2020 presidential election. Finally, Part Four makes the case that President Trump obstructed Congress's ability to hold the executive branch accountable by defying House investigators' requests for documents and testimony.

Besides including the House Judiciary Committee's full report, The Impeachment Report also presents the Dissenting Views from Republicans, the findings of the Intelligence Committee’s investigation in the full original impeachment report, the articles of impeachment themselves, a rebuttal report from Republican representatives that disputes the process and results of the Democratic investigation, and an introduction by esteemed attorney Alan Dershowitz. It is the ultimate resource for anyone who wants to know whether impeachment is warranted, and is a critical text in the ongoing back-and-forth battle to protect American democracy.