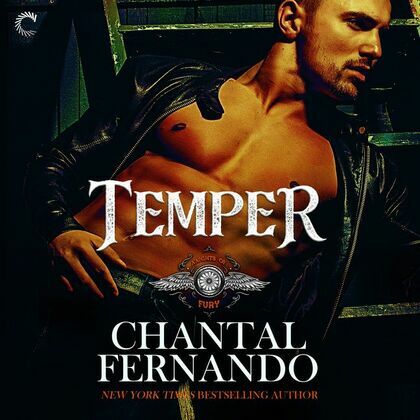 New York Times bestselling author Chantal Fernando returns to the Knights of Fury series with her most complicated hero yet. He may be the epitome of cool, but this MC President isn?t called Temper for nothing?

Every year, the hot, tatted biker comes into Abbie?s bar, orders whiskey, and asks her out. Every year, Abbie turns him down. After all, dating a man that goes by Temper seems like a really bad idea, no matter how attracted she is to him.

But this year is different. Abbie?s different. Older, wiser, and tired of being stuck behind the bar in a sleepy town. This year, she?s ready for whatever adventure the sexy but sweet biker has in store for her.

Or so she thinks?until an elegant candlelit dinner ends with a dead body.

Now, Abbie finds herself on the ride of her life, whisked away to the big city in Temper?s protective custody. She should be scared but?despite his nickname?it?s clear the last thing Temper would ever do is hurt a hair on her head. And when danger catches up with them, Abbie soon realizes that holding tight to her man while straddling a Harley may be the safest place of all.

This book is approximately 60,000 words

One-click with confidence. This title is part of the Carina Press Romance Promise: all the romance you?re looking for with an HEA/HFN. It?s a promise!