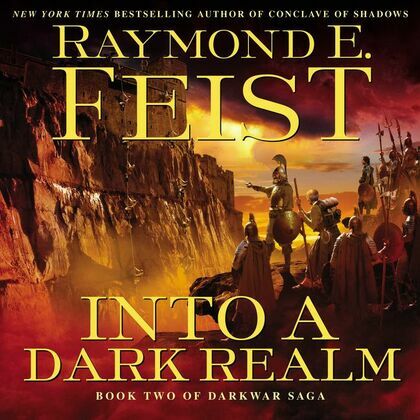 Into a Dark Realm

The acclaimed master fantasist is back with more adventure, danger, magic, and intrigue in this second thrilling installment in The Darkwar Saga

The Conclave of Shadows has foiled the Nighthawks? attempt to plunge the Empire of Great Kesh into civil war and now has undertaken to stamp out the Guild of Assassins, root and branch. But as the brotherhood of murder is being obliterated, Pug and his allies are confronted with an even more dire question: where is Leso Varen? They discover that the mad sorcerer has taken refuge on the world of Kelewan, among the most powerful men and women of that empire, the Magicians of the Assembly. Pug also learns that the massive hordes of the Dasati?the most vicious group of assassins he has ever known?is poised to make a joint invasion of both Kelewan and Midkemia.

To save the future of both empires, Pug and the Conclave of Shadows must journey into another realm of reality, into the darkest realm they have ever encountered: the Dasati home world!