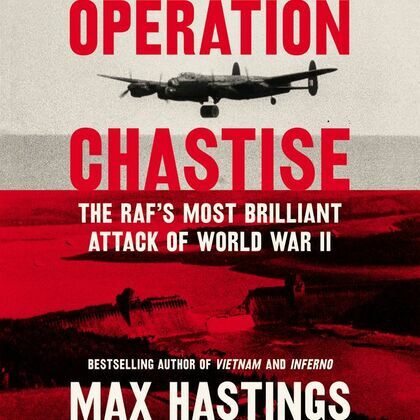 One of the most lauded historians of our time returns to the Second World War in this magnificent retelling of the awe-inspiring raid on German dams conducted by the Royal Army Force?s 617 Squadron.

The attack on Nazi Germany?s dams on May 17, 1943, was one of the most remarkable feats in military history. The absurdly young men of the Royal Air Force?s 617 Squadron set forth in cold blood and darkness, without benefit of electronic aids, to fly lumbering heavy bombers straight and level towards a target at a height above the water less than the length of a bowling alley. Yet this story?and the later wartime experience of the 617 Squadron?has never been told in full.

Max Hastings takes us back to the May 1943 raid to reveal how the truth of that night is considerably different from the popularized account most people know. The RAF had identified the Ruhr dams as strategic objectives as far back as 1938; in those five years Wing Commander Guy Gibson formed and trained the 617 Squadron. Hastings observes that while the dropping of Wallis?s mines provided the dramatic climax, only two of the eight aircraft lost came down over the dams?the rest were shot down on the flight to, or back from, the mission. And while the 617 Squadron?s valor is indisputable, the ultimate industrial damage caused by the dam raid was actually rather modest.

In 1943, these brave men caught the imagination of the world and uplifted the weary spirits of the British people. Their achievement unnerved the Nazi high command, and caused them to expend large resources on dam defenses?making the mission a success. An example of Churchill?s "military theatre" at its best, what 617 Squadron did was an extraordinary and heroic achievement, and a triumph of British ingenuity and technology?a story to be told for generations to come.