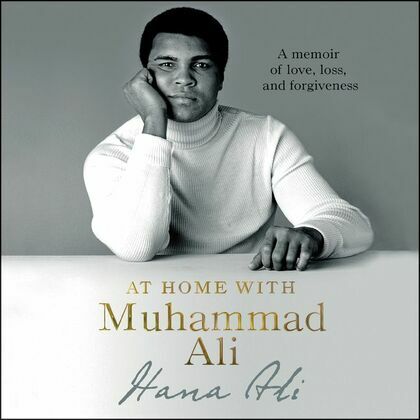 At Home with Muhammad Ali

Muhammad Ali?s daughter captures the legendary heavyweight boxing champion, Olympic Gold medalist, activist, and philanthropist as never before in this candid and intimate family memoir, based on personal recordings he kept throughout his adult life.

Athlete. Activist. Champion. Ambassador. Icon. Father. The greatest, Muhammad Ali, is all of these things. In this candid family memoir, Hana Ali illuminates this momentous figure as only a daughter can. As Ali approached the end of his astonishing boxing career, he embraced a new purpose and role, turning his focus to his family and friends. In that role, he took center stage as an ambassador for peace and friendship.

Dedicated to preserving his family?s unique history, Ali began recording a series of audio diaries in the 1970s, which his daughter later inherited. Through these private tapes, as well as personal journals, love letters, cherished memories, and many never-before-seen photographs, she reveals a complex man devoted to keeping all nine of his children united, and to helping others. Hana gives us a privileged glimpse inside the Ali home, sharing the everyday adventures her family experienced?all so ?normal,? with visitors such as Clint Eastwood and John Travolta dropping by. She shares the joy and laughter, the hardship and pain, and, most importantly, the dedication and love that has bonded them.

?It?s been said that my father is one of the most written-about people in the world,? Hana writes. ?As the chronicles continue to grow, the deepest and most essential essence of his spirit is still largely unknown.? A moving and poignant love letter from a daughter to a father, At Home with Muhammad Ali is the untold story of Ali?s family legacy?a gift both eternal and priceless.