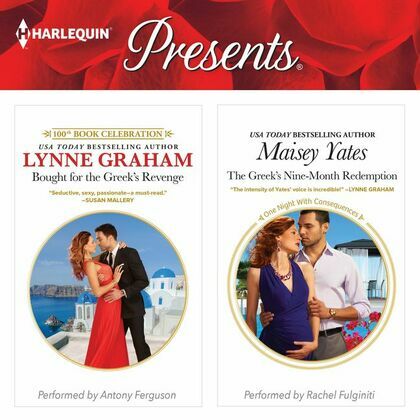 Bought for the Greek's Revenge & The Greek's Nine-Month Redemption

Bought for the Greek's Revenge

Bedded for the Greek's pleasure!
Ella Palmer has neither the money nor the connections to warrant the interest of Nikolai Drakos's archenemy. Yet the unassuming beauty has done just thatand claiming her will be Nikolai's ultimate satisfaction!
The ruthless tycoon will use any means necessary to ensure Ella's compliance, so he buys out her family's debts. Debts he'll forgive if Ella becomes his mistress. But when he discovers the true extent of her innocence, Nikolai is forced to consider something new; it appears the indomitable Greek is about to take a bride! ,/p>

Fury is all Elle St James feels when she looks at the man she once thought of as family. Apollo Savas has mercilessly destroyed her father's company, but she holds the last little piece!

Elle is determined to stop the stepbrother who is both sensual fantasy and darkest enemy. But their forbidden desire gives way to one illicit night that leaves untouched Elle with a life-changing consequence.

Now that she is irrevocably bound to Apollo, will nine months be long enough for Elle to redeem this brooding Greek?

When one nightleads to pregnancy!