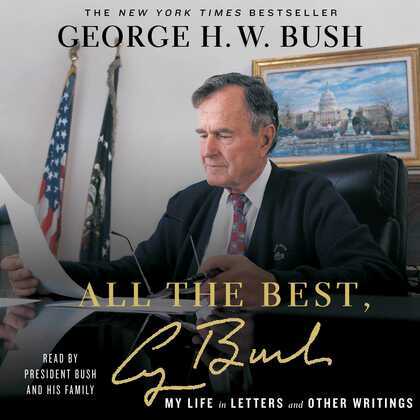 All the Best, George Bush

Former President George H.W. Bush, revealed through his letters and writings from 1941 to 2010, is "worth its weight in gold...a valuable update of the life of an honorable American leader" (The Washington Post).

"Who knew that beneath George Bush's buttoned-up propriety pulsed the warm heart of a prolific and occasionally poetic writer with a wacky sense of humor?" (People) Though reticent in public, George Bush openly shared his private thoughts in correspondence throughout his life. This collection of letters, diary entries, and memos is the closest we'll ever get to his autobiography.

Organized chronologically, readers will gain insights into Bush's career highlights--the oil business, his two terms in Congress, his ambassadorship to the UN, his service as an envoy to China, his tenure with the Central Intelligence Agency, and of course, the vice presidency, the presidency, and the post-presidency. They will also observe a devoted husband, father, and American. Ranging from a love letter to Barbara and a letter to his mother about missing his daughter, Robin, after her death from leukemia to a letter to his children written just before the beginning of Desert Storm, this collection is remarkable for Bush's candor, humor, and poignancy.

"An unusual glimpse of the private thoughts of a public figure" (Newsweek), this revised edition includes new letters and photographs that highlight the Bush family's enduring legacy, including letters that cover George W. Bush's presidency, 9/11, Bush senior's work with President Clinton to help the victims of natural disasters, and the meaning of friendship and family. All the Best, George Bush "will shed more light on the man's personal character and public persona than any memoir or biography could" (Publishers Weekly).