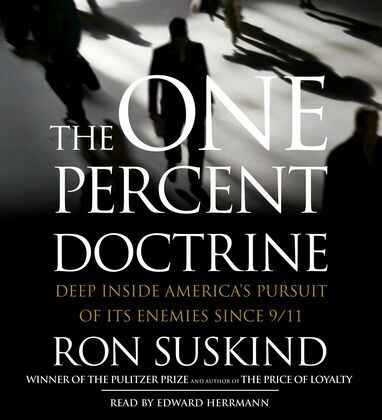 The One Percent Doctrine

Pulitzer Prize-winning journalist and bestselling author Ron Suskind takes you deep inside America's real battles in the "war on terror," in a riveting work of narrative nonfiction, filled with exclusive, historically significant disclosures that will echo across America and the world

The One Percent Doctrine is the deeply classified core of America's real playbook: a default strategy, designed by Dick Cheney, that has driven everything -- from war in Afghanistan to war in Iraq to the global search for jihadists -- since September 11, 2001. Suskind tells us what actually occurred over the next three years by tracing the steps of the officials who oversee the "war on terror" and the men and women who are actually fighting the fight. The internal battles between these two teams reveal everything about what America faces, and what it has done, in this age of terror.

Who is actually running U.S. foreign policy? Is there an operational cell, armed with WMDs, inside the United States? Have some of the world's most dangerous terrorists -- including leaders of al Qaeda -- been caught and accidentally released? Can America prevail in this struggle against enemies who are patient, ingenious, certain, and have clear tactical advantage?

With the unparalleled access to senior officials, past and present, that made The Price of Loyalty a #1 bestseller, Ron Suskind finally answers the questions that keep Americans awake at night, and reframes the debates that roil the globe.