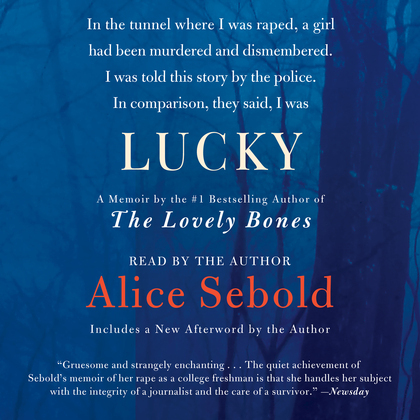 The timeless, fearless, #1 New York Times bestselling memoir from the author of The Lovely Bones--a powerful account of her sexual assault at the age of eighteen and the harrowing trial that followed, now with a new afterword by the author.

In a memoir hailed for its searing candor, as well as its wit, Alice Sebold reveals how her life was transformed when, as an eighteen-year-old college freshman, she was brutally raped and beaten in a park near campus. What ultimately propels this chronicle of sexual assault and its aftermath is Sebold’s indomitable spirit, as she fights to secure her rapist’s arrest and conviction and comes to terms with a relationship to the world that has forever changed. With over a million copies in print, Lucky has touched the lives of a generation of readers. Sebold illuminates the experience of trauma victims and imparts a wisdom profoundly hard-won: “You save yourself or you remain unsaved.” Now reissued with a new afterword by the author, her story remains as urgent as it was when it was first published eighteen years ago.