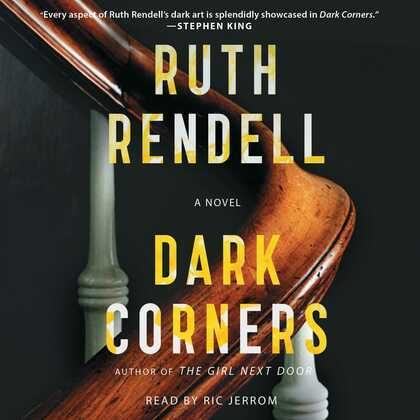 "A spectacularly creepy and macabre tale" (Entertainment Weekly) of blackmail, murders both accidental and opportunistic, and of one life's fateful unraveling--from Ruth Rendell, "one of the most remarkable novelists of her generation" (People), writing at her most mesmerizing. Rendell completed Dark Corners shortly before her death in 2015.

When his father dies, Carl Martin inherits a house in an increasingly rich and trendy London neighborhood. Cash poor, Carl rents the upstairs room and kitchen to the first person he interviews, Dermot McKinnon. That is mistake number one. Mistake number two is keeping the bizarre collection of homeopathic and alternative "cures" that his father left in the medicine cabinet, including a stash of controversial diet pills. Mistake number three is selling fifty of those diet pills to a friend, who is then found dead.

Dermot seizes a nefarious opportunity and begins to blackmail Carl, refusing to pay rent, and creepily invading Carl's space. Ingeniously weaving together two storylines that finally merge in a shocking turn, Ruth Rendell describes one man's spiral into darkness--and murder--as he falls victim to a diabolical foe he cannot escape.

This is brilliant psychological suspense that gets under your skin. As Stephen King says, "No one surpasses Ruth Rendell when it comes to stories of obsession, instability, and malignant coincidence." Dark Corners, her last book, "ranks among her best" (The Washington Post).