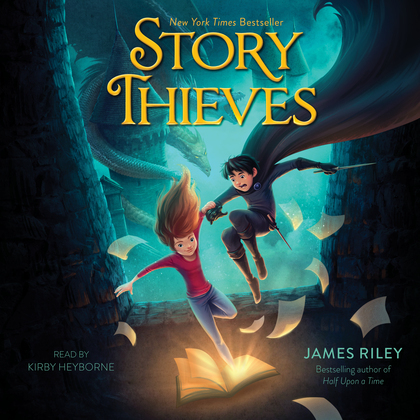 This “clever opener likely to leave readers breathless both with laughter and anticipation” (Kirkus Reviews, starred review) is the first in the New York Times bestselling series from the author of the Half Upon a Time trilogy.

Life is boring when you live in the real world, instead of starring in your own book series. Owen knows that better than anyone, what with the real world’s homework and chores.

But everything changes the day Owen sees the impossible happen--his classmate Bethany climb out of a book in the library. It turns out Bethany’s half-fictional and has been searching every book she can find for her missing father, a fictional character.

Bethany can’t let anyone else learn her secret, so Owen makes her a deal: All she has to do is take him into a book in Owen’s favorite Kiel Gnomenfoot series, and he’ll never say a word. Besides, visiting the book might help Bethany find her father…

…Or it might just destroy the Kiel Gnomenfoot series, reveal Bethany’s secret to the entire world, and force Owen to live out Kiel Gnomenfoot’s final (very final) adventure.