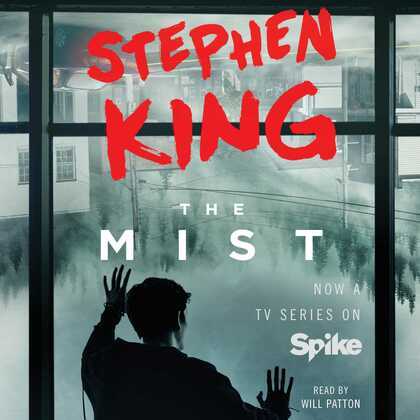 by Stephen King (Author), Will Patton (Narrateur)
Excerpt
Fiction Mystery & detective Suspense Horror Media tie-in
warning_amber
One or more licenses for this book have been acquired by your organisation details
AUDIOBOOK
Unlimited loans, 2 years, One at a time
Details

#1 New York Times bestselling author Stephen King’s terrifying novella about a town engulfed in a dense, mysterious mist as humanity makes its last stand against unholy destruction—originally published in the acclaimed short story collection Skeleton Crew and made into a TV series, as well as a feature film starring Thomas Jane and Marcia Gay Harden.

In the wake of a summer storm, terror descends...David Drayton, his son Billy, and their neighbor Brent Norton join dozens of others and head to the local grocery store to replenish supplies following a freak storm. Once there, they become trapped by a strange mist that has enveloped the town. As the confinement takes its toll on their nerves, a religious zealot, Mrs. Carmody, begins to play on their fears to convince them that this is God’s vengeance for their sins. She insists a sacrifice must be made and two groups—those for and those against—are aligned. Clearly, staying in the store may prove fatal, and the Draytons, along with store employee Ollie Weeks, Amanda Dumfries, Irene Reppler, and Dan Miller, attempt to make their escape. But what’s out there may be worse than what they left behind.

This exhilarating novella explores the horror in both the enemy you know—and the one you can only imagine.