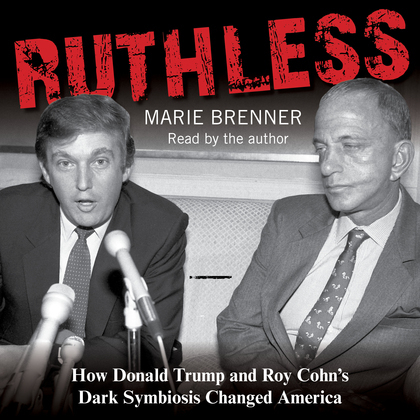 One of the most prolific and influential investigative journalists of her generation, Marie Brenner has brought countless fascinating people?politicians, activists, journalists, and private citizens?to life through her writing. Now, for the first time, her profile of the nefarious relationship between Donald Trump and Roy Cohn is available as an audio download read by the author.

New York attorney Roy Cohn?infamous since the 1950s from his stint as Senator Joseph McCarthy’s chief counsel?and Donald Trump first met in 1973 when Trump was still trying to make a name for himself as a real estate developer while fighting discrimination charges against his family’s business. After their chance meeting at a Manhattan disco, Cohn went to work defending Trump, starting a business and personal association that endured in various forms until Cohn’s death in 1986.

Brenner first started reporting on the Trump/Cohn dynamic back in 1980, and she brings to her assessment an incomparable legacy of covering both subjects. As Brenner writes, Cohn “was always there to help with the shady tax abatements, the zoning variances, the sweetheart deals, and the threats to those who might stand in [Trump’s] way,” serving to launch and sustain Trump’s early real estate career.

More than legal representation, however, Cohn offered Trump a way of seeing the world?and the opportunities for seeking advantage within it?that still inform Trump’s approach to politics and governing. As Brenner reports, then president-elect Trump told mutual associate Roger Stone another major character in Ruthless?on the day after his unexpected electoral victory, “Wouldn’t Roy love to see this moment? Boy do we miss him.”

Spanning over 50 years of US history, peopled both with characters long dead and current newsmakers still in today’s headlines, Ruthless is an eye-opening must-listen for anyone who wants to understand how the nation got to where we are today.