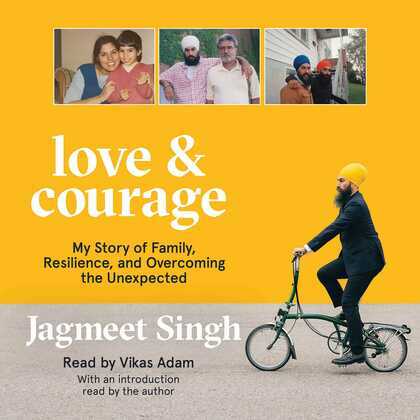 From the leader of Canada’s New Democratic Party--Jagmeet Singh--comes a personal and heartfelt story about family and overcoming adversity.

In October 2017, Jagmeet Singh was elected as the first visible minority to lead a major federal political party in Canada. The historic milestone was celebrated across the nation.

About a month earlier, in the lead up to his election, Jagmeet held community meet-and-greets across Canada. At one such event, a disruptive heckler in the crowd hurled accusations at him. Jagmeet responded by calmly calling for all Canadians to act with “love and courage” in the face of hate. That response immediately went viral, and people across the country began asking, “Who is Jagmeet Singh? And why ‘love and courage’?”

This personal and heartfelt memoir is Jagmeet’s answer to that question. In it, we are invited to walk with him through childhood to adulthood as he learns powerful, moving, and sometimes traumatic lessons about hardship, addiction, and the impact of not belonging. We meet his strong family, including his mother, who teaches him that “we are all one; we are all connected,” a valuable lesson that has shaped who he is today.

This story is not a political memoir. This is a story of family, love, and courage, and how strengthening the connection between us all is the way to building a better world.