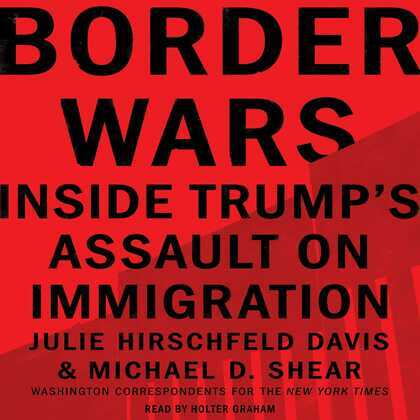 Two New York Times Washington correspondents provide a detailed, “fact-based account of what precipitated some of this administration’s more brazen assaults on immigration” (The Washington Post) filled with never-before-told stories of this key issue of Donald Trump’s presidency.

No issue matters more to Donald Trump and his administration than restricting immigration.

Julie Hirschfeld Davis and Michael D. Shear have covered the Trump administration from its earliest days. In Border Wars, they take us inside the White House to document how Stephen Miller and other anti-immigration officials blocked asylum-seekers and refugees, separated families, threatened deportation, and sought to erode the longstanding bipartisan consensus that immigration and immigrants make positive contributions to America. Their revelation of Trump’s desire for a border moat filled with alligators made national news.

As the authors reveal, Trump has used immigration to stoke fears (“the caravan”), attack Democrats and the courts, and distract from negative news and political difficulties. As he seeks reelection in 2020, Trump has elevated immigration in the imaginations of many Americans into a national crisis.

Border Wars identifies the players behind Trump’s anti-immigration policies, showing how they planned, stumbled and fought their way toward changes that have further polarized the nation. “[Davis and Shear’s] exquisitely reported Border Wars reveals the shattering horror of the moment, [and] the mercurial unreliability and instability of the president” (The New York Times Book Review).