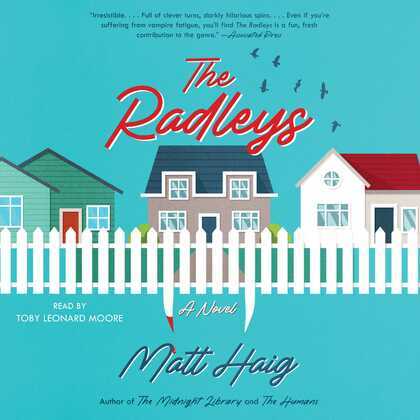 This Alex Award-winning novel is "irresistible...full of clever turns, darkly hilarious spins...Even if you're suffering from vampire fatigue...The Radleys is a fun, fresh contribution to the genre" (Associated Press).

Just about everyone knows a family like the Radleys. Many of us grew up next door to one. They are a modern family, averagely content, averagely dysfunctional, living in a staid and quiet suburban English town. Peter is an overworked doctor whose wife, Helen, has become increasingly remote and uncommunicative. Rowan, their teenage son, is being bullied at school, and their anemic daughter, Clara, has recently become a vegan. They are typical, that is, save for one devastating exception: Peter and Helen are vampires and have--for seventeen years--been abstaining by choice from a life of chasing blood in the hope that their children could live normal lives.

One night, Clara finds herself driven to commit a shocking--and disturbingly satisfying--act of violence, and her parents are forced to explain their history of shadows and lies. A police investigation is launched that uncovers a richness of vampire history heretofore unknown to the general public. And when the malevolent and alluring Uncle Will, a practicing vampire, arrives to throw the police off Clara’s trail, he winds up throwing the whole house into temptation and turmoil and unleashing a host of dark secrets that threaten the Radleys’ marriage.

The Radleys is a moving, thrilling, and radiant domestic novel that explores with daring the lengths a parent will go to protect a child, what it costs you to deny your identity, the undeniable appeal of sin, and the everlasting, iridescent bonds of family love. Read it and ask what we grow into when we grow up, and what we gain--and lose--when we deny our appetites.