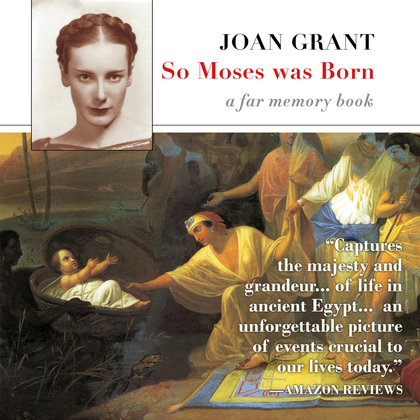 So Moses Was Born

The seventh of Joan Grant's "Far Memory" novels, So Moses Was Born, is set in Egypt, in the time just before the birth of Moses. The story is a familiar one: found in the bulrushes, Moses's upbringing in the court of Egypt gave him the influence and power to set the Israelites free. Joan Grant enlarges the picture by depicting the events that led up to the discovery of the baby Moses, convincingly portraying the man she believed was his father, Ramoses II, through the words of his reclusive half-brother Nebunefer. Called back from his chosen exile in the idyllic land of the Living Waters, Nebunefer is asked by the Pharoah to predict which of the children born to the royal concubines will be worthy to succeed him, but as we know there will be another destiny for the baby Moses, child of a Hebrew mother and a royal father.