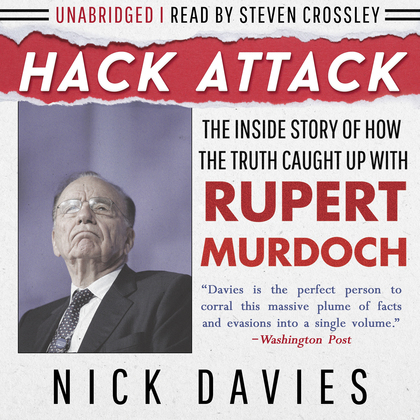 At first, it seemed like a small story. The royaleditor of the News of the World wascaught listening to the voice mail messages of staff at Buckingham Palace. Heand a private investigator were jailed, and the case was closed. But NickDavies, special correspondent for the Guardian,knew it didn?t add up. He began to investigate and ended up exposing a world ofcrime and cover-up, of fear and favor?the long shadow of Rupert Murdoch?s mediaempire.

HackAttack is the mesmerizing story of how Davies and a smallgroup of lawyers and politicians took on one of the most powerful men in theworld and emerged victorious. It exposes the inner workings of the ruthlessmachine that was the News of the World and of the private investigators who hacked phones, listened to live calls,sent Trojan horse emails, bribed the police, and committed burglaries to dig uptabloid scoops. Above all, it is a study of the private lives of the powerelite. It paints an intimate portrait of the social network that gave Murdoch privilegedaccess to government and allowed him and his lieutenants to intimidate anyonewho stood up to them.

Spanning the course of the investigation from Davies?contact with his first source in early 2008 to the resolution of the criminaltrial in June 2014, this is the definitive record of one of the major scandalsof our time, written by the journalist who was there every step of the way.