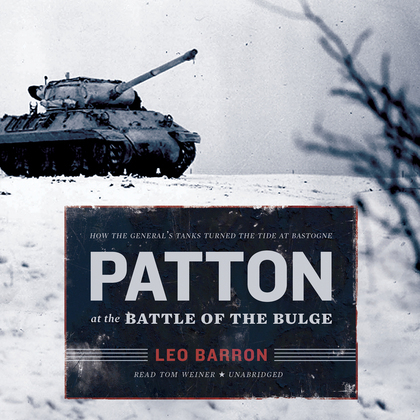 Patton at the Battle of the Bulge

December 1944. For thebesieged American defenders of Bastogne, time was running out …

Hitler’s forces had pressed in on the small Belgian town ina desperate offensive designed to push back the Allies, starting the Battle ofthe Bulge. So far, the US soldiers had managed to repel waves of attackers andeven a panzer onslaught, but as their ammunition dwindled, the wearyparatroopers of the 101st Airborne could only hope for a miracle—a miracle inthe form of General George S. Patton and his Third Army.

More than a hundred miles away, Patton, ordered to race hismen to Bastogne, was already putting in motion the most crucial charge of hiscareer. Tapped to spearhead his counterstrike against the Wehrmacht was the Fourth Armored Division, a bloodied but experienced unit that had fought and sloggedits way across France. But blazing a trail into Belgium meant going up againstsome of the best infantry and tank units in the German Army. Failure to reachBastogne in time could result in the overrunning of the 101st—a catastrophicdefeat that could turn the tide of the war and secure victory for the Nazis.

In Patton at theBattle of the Bulge, Army veteran and historian Leo Barron explores one ofthe most famous yet little understood clashes of the war, a vitally importantchapter in one of history’s biggest battles.