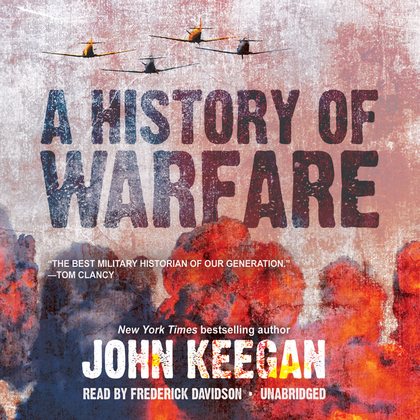 A History of Warfare

In this encyclopedically learned and immensely gripping book, one of our foremost military historians demolishes the famous dictum that war is the continuation of policy by other means. Beginning with the premise that all civilizations owe their origins to warmaking, Keegan probes the meanings, motivations, and methods underlying war in different societies over the course of more than two thousand years. Following the progress of human aggression in its full historical sweep--from the strangely ritualistic combat of Stone Age peoples to the warfare of mass destruction in the present age--his illuminating and lively narrative gives us all the world's great warrior cultures, including the Zulus, the samurai, and the horse peoples of the steppe, as well as the famed warmakers of the West. He shows why honor has always been accorded to the soldierly virtues, whatever the cultural context, and how war has maintained its singular hold on the imagination, reaching into "the most secret places of the human heart, where self dissolves rational purpose, where pride reigns, where emotion is paramount, where instinct is king." Keegan's analysis of centuries of conflict unveils the deepest motives behind humanity's penchant for mass bloodshed.

A History of Warfare is a masterpiece of military scholarship, irresistible in its style and terrifying in its implications.