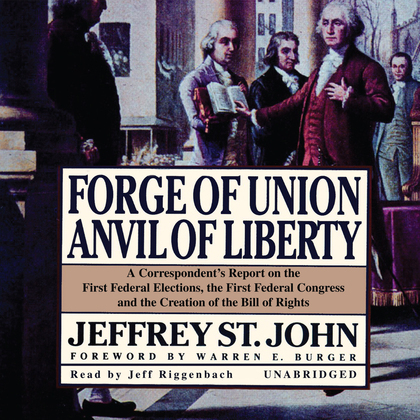 Forge of Union, Anvil of Liberty

One of the most important news stories of the last two centuries comes to life in this “eyewitness account” of America's first Federal elections, the First Congress, and the creation of the Bill of Rights. In a swift-moving and colorful chronicle written by St. John as though he were an on-the-scene reporter, listeners will discover how Madison had to fight both friend and foe of the Constitution to pass a Federal Bill of Rights in the First Congress; why Washington and Madison saw the future of America in the frontier West and not in Europe; and how Spanish and British intrigues—and hostile Indian tribes on the American frontier—posed a threat to the survival of the new national government.

Vastly entertaining, based on documented and newly-available sources, this book is both a popular history and an important contribution to the study of the founding of the American Republic.