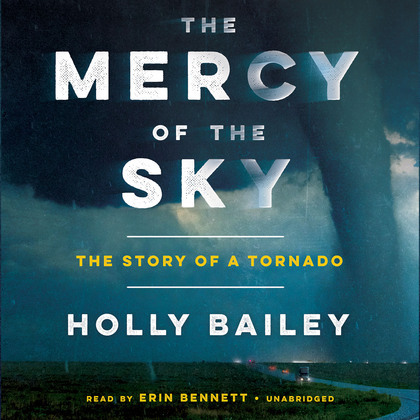 The Mercy of the Sky

The Mercy of the Sky is the harrowing inside account of Oklahoma?s deadliest tornado, penned by a local writer who became a national correspondent.

Oklahomans have long been known for their fatalism and grit, but even old-timers are troubled by the twisters that are devastating the state with increasing frequency. On May 20, 2013, the worst tornado on record landed a direct hit on the small town of Moore, destroying two schools while the children cowered inside.

Oklahoma native Holly Bailey grew up dreaming of becoming a storm chaser. Instead she became Newsweek?s youngest-ever White House correspondent, traveling to war zones with Presidents Bush and Obama. When Moore was hit, Bailey went back both as a journalist and a hometown girl and spoke with the teachers who put their lives at risk to save their students, the weathermen more revered than rock stars and more tormented than they let on, and many shell-shocked residents. In The Mercy of the Sky, Bailey does for the Oklahoma flatlands what Sebastian Junger did for Gloucester, Massachusetts, in The Perfect Storm, telling a dramatic, page-turning story about a town that must survive the elements?or die.