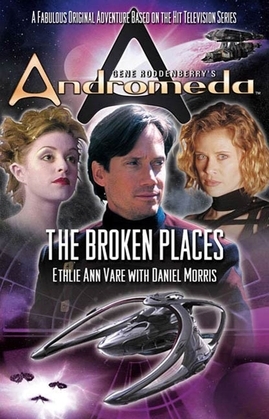 When Beka Valentine's ne'er-do-well brother Rafe limps onto the Andromeda Ascendant in a stolen junker with a sputtering Slipstream drive, Beka can't turn him away, because he claims to have found the mother they never knew.

Unfortunately, right now the Andromeda is the linchpin in a precarious negotiation between the Drago-Kazov Pride and the Human Interplanetary Alliance, which seeks to free Earth and other old-school planets from the Nietzschean yoke. But the HIA may also be allied with the pure-human-supremacist Knights of Genetic Purity, who, in their evangelical fervor, have become every bit as fanatical as the genetically engineered devil they oppose. If the HIA allies with the Genites, the Milky Way will see yet another Human-Nietzschean bloodbath. Captain Dylan Hunt has survived one already and will do just about anything to prevent another such debacle.

Dylan can't count on Seamus Harper, the only unmodified human in his crew, who is naïvely susceptible to the appeal of the Genite cause. He needs every level-headed crewmate he's got, and Beka, for all her emotional Sturm und Drang, is the best pilot in three galaxies.

But Beka can't resist the chance---however remote---to find her long-lost mother. Years before, Magdalena Valentine went on a quest . . . the same one Beka has made her own. A quest to find the advanced technology of the lost Vedran race. A technology so powerful it lets the Vedrans hide their solar system in the fabric of the Slipstream itself; so powerful it could destroy the universe as we know it.

This quest is where it all must lead---where, if you ask a certain purple alien, it was always, inevitably, destined to lead. Now only Dylan Hunt can stop Beka Valentine from activating the Vedran device. And he may have to kill her to do it. That is, if Tyr Anasazi doesn't kill him first. Or the Knights of Genetic Purity. Or the Human Interstellar Alliance . . . led by one Seamus Harper.

The fate of the universe hinges on what Dylan Hunt and his crew do next!