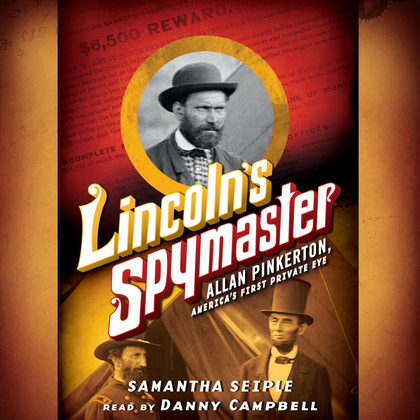 From Samantha Seiple, the award-winning author of Ghosts in the Fog, comes the first book for young adults to tell the story of Allan Pinkerton, America's first private eye.

Pinkerton was just a poor immigrant barrel-maker in Illinois when he stumbled across his first case just miles from his home. His reputation grew and people began approaching Pinkerton with their cases, leading him to open the first-of-its-kind private detective agency. Pinkerton assembled a team of undercover agents, and together they caught train robbers, counterfeiters, and other outlaws. Soon these outlaws, including Jesse James, became their nemeses. Danger didn't stop the agency! The team even uncovered and stopped an assassination plot against president-elect Abraham Lincoln! Seeing firsthand the value of Pinkerton's service, Lincoln funded Pinkerton's spy network, a precursor to the Secret Service. Allan Pinkerton is known as the father of modern-day espionage, and this is the first book for young adults to tell his story!