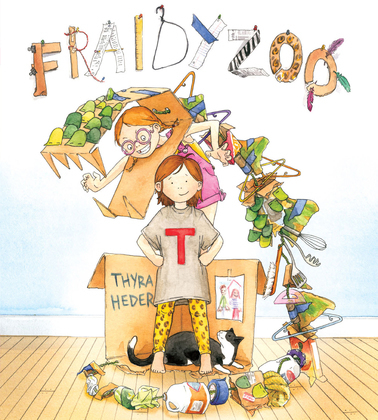 by Thyra Heder (Author)
Fiction Juvenile & Young Adult Themes Animals Zoos Drama
EPUB
unlimited loans, One at a time
Details
EPUB
40 Loans, 10 Concurent Loans
Details
It?s a great day to go to the zoo! As her family hustles to get out the door, Little T lags behind. She?s afraid to go back to the zoo; the only trouble is, she can?t remember why. As an ingenious solution to help her remember, her mom, dad, and sister construct homemade costumes and act out zoo animals?in alphabetical order, no less! The costumes and scenes grow increasingly elaborate and breathtakingly creative. An umbrella and bubble wrap magically transform into a jellyfish, bath towels and a can of soda become a parrot, and many, many more. At the end of the day, Little T has conquered her fear and no longer feels like a ?fraidyzoo.??

In this charming, witty picture book debut, Thyra Heder honors the bravery it takes to face your fears, and the loving people who help you do so.
Â

"WARNING: Expect riotous buffoonery after reading this clever and original alphabet story, as kids will definitely want to ?parrot?? the examples."

"Debut talent Heder comes up with a wildly imaginative idea for an alphabet book/animal guessing game, elaborates it with smartly drafted ink-and-watercolor spreads, and seasons it with plenty of family warmth and hullaballoo."

"The cut-and-paste, handmade look and feel of this picture book underscores its thematic ode to creative problem solving... The charming, detailed watercolor and ink illustrations really tell the story, and children will relish poring over them to guess the animal costumes and identify their construction materials."

"Heder tells a child-relevant story about facing your fears with a light hand and zippy prose, but it?s her art that dials the zippiness up to 11, as her warm and humorously realistic figures gallivant alongside some remarkably envisioned handcrafted animal puppets."

"This book does the impossible, taking one of the oldest children?s book conventions, the zoo alphabet, and completely reinventing it.Â  It?s a story about a family helping one of their own overcome fear by being utterly silly and completely loving.Â  The whole thing is done with such a confident and lively style, it?s hard to believe that this is Heder?s first picture book. Fraidyzoo is funny, original, and announces Heder as a force to be reckoned with."

Illustrations capture the empathy of a very concerned, loving, and creative family."