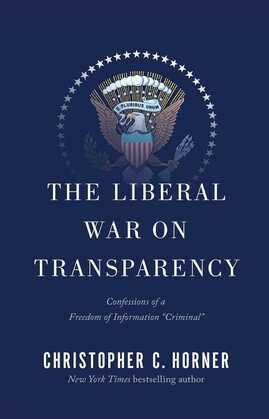 The Liberal War on Transparency: Confessions of a Freedom of Information ',Criminal',

Hailed by Glenn Beck as a "Watchdog," bestselling author and legal expert Christopher Horner explains how every citizen can use the Freedom of Information Act to find out what our government is up to.

LIBERALS ARE HIDING THE TRUTH FROM YOU. WHAT ARE YOU GOING TO DO ABOUT IT, AMERICA?

Hailed by Glenn Beck as a “watchdog” and by Rush Limbaugh as a “go-to guy,” bestselling author and attorney Christopher C. Horner is a leader in the fight against liberal tyranny in America--with his requests for information even declared “criminal” by the Obama administration. Revealing explosive new information obtained through the Freedom of Information Act and well-placed sources, Horner exposes the tightly kept secret of liberals running our government and schools: a carefully managed war to undermine the taxpayers’ right to see what their government is up to.

During his campaign, Barack Obama promised “the most transparent administration in history.” Not only has this proven to be an empty promise, but he and his liberal allies systematically hide their activities from the public. They use private email accounts and computers, avoid creating records, stonewall information requests, and otherwise delay or deny access to information every taxpayer has a right to know. This eye-opening book exposes the White House tricks, tactics, and “tradecraft” now regularly used to keep Americans in the dark. You’ll learn:

* Scandalous examples of activist government employee tricks to hide their activities.
* How the Obama administration, which leaks sensitive information for political gain (while aggressively prosecuting whistleblowers), deliberately politicized the FOIA process to stonewall legitimate requests for public information.
* What the Democrats tried to hide about their crony deals with big business, Solyndra, various liberal initiatives, and UN schemes.
* How American colleges and universities bow to radical liberal faculties to hide public records.
* How to fight these tactics and make your own FOIA requests to get the information you need--even when the government tries to stop you.

This is more than an exposé on the latest Washington cover-up. It is a wake-up call and how-to manual for all Americans to demand transparency from our leaders and defeat the liberal attack on open and honest debate. If you believe in America, you need to fight for your freedoms. You need to take a stand against the Liberal War on Transparency.