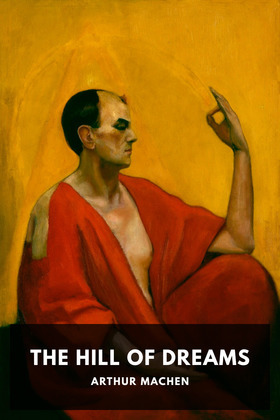 The Hill of Dreams

The novel recounts the life of a young man, Lucian Taylor, focusing on his dreamy childhood in rural Wales, in a town based on Caerleon. The Hill of Dreams of the title is an old Roman fort where Lucian has strange sensual visions, including ones of the town in the time of Roman Britain. Later, the novel describes Lucian's attempts to make a living as an author in London, enduring poverty and suffering in the pursuit of art and history.

Arthur Machen (1863-1947) was a leading Welsh author. He is best known for his influential supernatural, fantasy, and horror fiction. He also is well known for his leading role in creating the legend of the Angels of Mons. At the age of eleven, he boarded at Hereford Cathedral School, where he received an excellent classical education. Family poverty ruled out attendance at university. Around 1890 Machen began to publish in literary magazines, writing stories influenced by the works of Robert Louis Stevenson, some of which used gothic or fantastic themes. This led to his first major success, The Great God Pan (1894), which was part of the growing aesthetic movement of the time. Machen's story was widely denounced for its sexual and horrific content and subsequently sold well, going into a second edition. Machen next produced The Three Impostors, a novel composed of a number of interwoven tales, in 1895. The novel and the stories within it were eventually to be regarded as among Machen's best works.