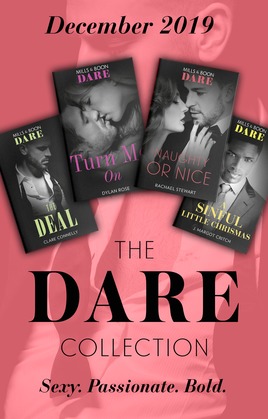 The Dare Collection December 2019: The Deal (The Billionaires Club) / Turn Me On / Naughty or Nice / A Sinful Little Christmas (Mills & Boon e-Book Collections)

A deal she can’t refuse.
After a night of decadent, anonymous sex British playboy billionaire Nicholas Rothsmore makes a deal Billionaire Club owner Imogen Carmichael can’t refuse—four weeks of pleasure! But will those four weeks end up lasting a lifetime…

Turn me on
Dylan Rose

Every taste is perfection. Every touch is forbidden.
Heartbroken food journalist Faye has no appetite. Not for food, not for relationships, and definitely not for sex. That is, until she's sent to London to interview sexy celebrity chef Gregor Wright…who's used to satisfying every appetite imaginable.

He’s her worst nightmare…isn’t he?
Amongst the glitter and champagne Eva spots him. Lucas Waring. The man who betrayed her family and broke her heart. One glance from his dark, intense eyes and Eva knows she is drawn in once again. But this time, nothing is stopping her from having what she wants…

She’ll show her sexy new employee who’s in charge
Alana Carter manages the hottest sex club in Vegas, and loves being the boss. So when British consultant Michael Paul turns up she’s furious. But soon the fiery chemistry between them goes from wrestling for control in the boardroom to letting Michael dominate in the bedroom.