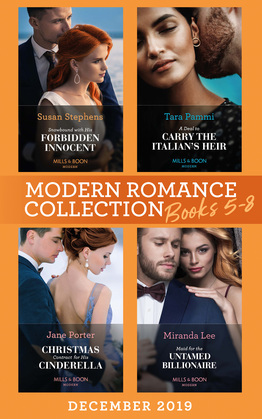 Modern Romance December 2019 Books 5-8: Snowbound with His Forbidden Innocent / A Deal to Carry the Italian's Heir / Christmas Contract for His Cinderella / Maid for the Untamed Billionaire (Mills & Boon e-Book Collections)

When party planner Stacy Winner meets her new client, she’s shocked to find it’s billionaire Lucas Da Silva, her brother’s best friend and her teenage crush. When Lucas last saw Stacy she was just his friend’s clumsy little sister but she is now grown up and a fiery attraction sizzles between them…

A Deal to Carry the Italian's Heir
Tara Pammi

When CEO Leonardo Brunetti is approached by his oldest friend Neha Fernandez, with a request to father her child, Leo – who rarely trusts women – is bemused, stunned and shocked. Why would Neha want to throw away her own business empire? And if he does as she asks will he really be able to walk away?

Before remarrying, widowed tycoon and aristocrat, Count Marcu Uberto, needs help with his three young children over Christmas. Desperate he asks his childhood friend Monet Wilde. But Marcu has always found it hard to resist Monet, and now that he has her within the walls of his home, it’s even harder. But convincing her is the problem, especially as he's broken her heart once, and she's not about to be hurt again.

Jake Anderson, Australia’s most eligible bachelor, is looking for a housekeeper and Abby Jensen is the perfect candidate. A shy Cinderella, she’s the only woman he’s met who’s not interested in his fame or fortune. But as their close proximity only serves to intensify the sizzling attraction between them, could a night of passion lead to a whole lot more?