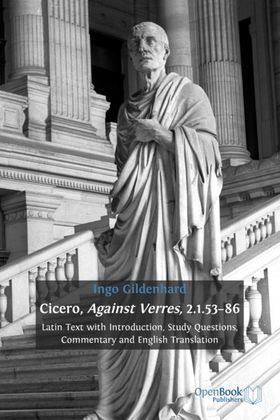 Looting, despoiling temples, attempted rape and judicial murder: these are just some of the themes of this classic piece of writing by one of the world's greatest orators. This particular passage is from the second book of Cicero's Speeches against Verres, who was a former Roman magistrate on trial for serious misconduct. Cicero presents the lurid details of Verres' alleged crimes in exquisite and sophisticated prose.
This volume provides a portion of the original text of Cicero's speech in Latin, a detailed commentary, study aids, and a translation. As a literary artefact, the speech gives us insight into how the supreme master of Latin eloquence developed what we would now call rhetorical "spin". As an historical document, it provides a window into the dark underbelly of Rome's imperial expansion and exploitation of the Near East.
Ingo Gildenhard's illuminating commentary on this A-Level set text will be of particular interest to students of Latin at both high school and undergraduate level. It will also be a valuable resource to Latin teachers and to anyone interested in Cicero, language and rhetoric, and the legal culture of Ancient Rome.