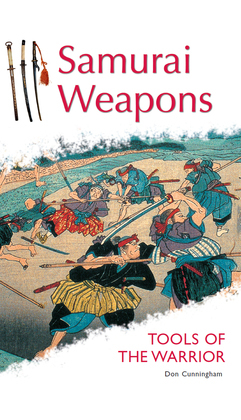 Samurai Weapons: Tools of the Warrior

While the samurai is well known as the military nobility of medieval Japan, their range of weapons, which went far beyond the katana, bow, and spear, is lesser known. For instance, some weapons, like the tesson, or iron fan, were used in secret where samurai swords were not allowed. Others were improvised, with warriors using whatever fighting tool was at hand. In Samurai Weapons, readers will follow the story of Zenigata Heiji, among others, who developed an uncanny ability to use heavy coins as dangerous weapons by throwing them like bullets.

Author Don Cunningham, who held ranks in judo, jujutsu, and kendo, including a second dan license from the Kodokan Judo Institute in Tokyo, gives us a historical look at these ancient arms in a way that's useful for novices and samurai experts alike.

Chapters cover such rich details as:Learn how and why samurai weapons included not only the sword of popular lore, but also a variety of others. Cunningham describes the society of Japan, how the samurai class arose, and the place in society that samurai held through the centuries.