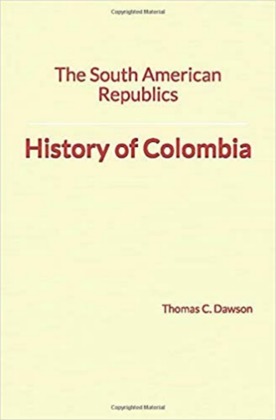 by Thomas C. Dawson (Author)
Excerpt
Nonfiction History History by country South America
warning_amber
One or more licenses for this book have been acquired by your organisation details
EPUB
20 loans, 20 Concurrent loans
Details

History of Colombia from the conquest and settlement to the modern Colombia.

“When Alonso de Ojeda coasted along the Venezuelan shore in the spring of 1499 he stopped short just west of the Gulf of Maracaibo, near the present boundary between Venezuela and Colombia. The following year Rodrigo Bastida doubled the Goajira peninsula and pursued his voyage to the west, catching sight of the giant snowclad mountains of Santa Marta and of the low land which lies between them and the sea. Coming to the mouth of a great river on the day sacred to Saint Magdalene, he named it the Magdalena, and farther to the south-west found the fine harbour where the city of Cartagena now stands. At the head of the Gulf of Darien he came to another great river, the Atrato, and here his explorations stopped. More than a year later the great Columbus himself, on his fourth and last voyage, sighted the Central American coast at Cape Gracias á Dios, near the present boundary between Nicaragua and Honduras. Thence he sailed south-east along a pestilential shore for eight hundred miles, finally arriving near the point where Bastida had left off his explorations. It is said that Bartholomew Columbus founded a settlement on the Atlantic shore of the Isthmus, but it was soon destroyed by the neighbouring Indians. The long stretch of coast was unfit for the abode of Europeans, but the Indians had gold in abundance, and the Spaniards were satisfied that the interior was full of mines...”