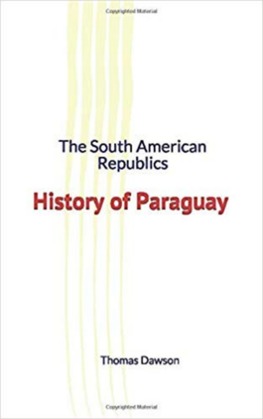 pHistory of Paraguay: from the beginning of the settlements, the colonization of the country, the war for independence, and the modern republic of Paraguay. /p
p"The beginnings of the settlements in Paraguay have been sketched in the introductory chapter on the discoveries and conquest. In 1526, Cabot, searching to find a route to the gold and silver mines of the centre of the continent, penetrated as far as the site of the present city of Asuncion. He had already, in the exploration of the Upper Paraná, skirted the southern and eastern boundary of what has since become the country of Paraguay. Ten years later the exhausted and discouraged remnants of Mendoza's great expedition sought rest and refuge among the peaceful agricultural tribes of this region. Under Domingos Irala, these six hundred surviving Spanish adventurers founded Asuncion in 1536, the first settlement of the valley of the Plate. They reduced the Indians to a mild slavery, compelling them to build houses, perform menial services, and cultivate the soil. The country was divided into great tracts called "encomiendas," which, with the Indians that inhabited them, were distributed among the settlers. Few women had been able to follow Mendoza's expedition, so the Spaniards of Asuncion took wives from among the Indians. Subsequent immigration was small, and the proportion of Spanish blood has always been inconsiderable, compared with the number of aborigines. The children of the marriages between the Spanish conquerors and Indian women were proud of their white descent. The superior strain of blood easily dominated, and the mixed Paraguayan Creoles became Spaniards to all intents and purposes. Spaniards and Creoles, however, learned the Indian language; Guarany rather than Spanish became, and has remained, the most usual method of communication..." /p
p /p