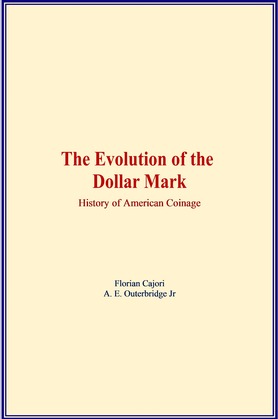 The Evolution of the Dollar Mark

pThis book treats of the evolution of the US dollar mark, the history and curiosities of American coinage. /p
pThe United States dollar, adopted in 1785, was avowedly modelled on the average weight of the Spanish dollar coins in circulation. Thomas Jefferson speaks of the dollar as "a known coin, and the most familiar of all to the minds of the people." No United States dollars were actually coined before the year 1794. We proceed to unfold our data and to show the evolution of the dollar mark by stages so easy and natural, that the conclusion is irresistible.../p
p“There are few mathematical symbols the origin of which has given rise to more unrestrained speculation and less real scientific study than has our dollar mark, $. About a dozen different theories have been advanced by men of imaginative minds, but not one of these would-be historians permitted himself to be hampered by the underlying facts. These speculators have dwelt with special fondness upon monogrammatic forms, some of which, it must be admitted, maintain considerable antecedent probability. Breathes there an American with soul so dead that he has not been thrilled with patriotic fervor over the "U. S. theory" which ascribes the origin of the $ mark to the superposition of the letters U and S?...”/p