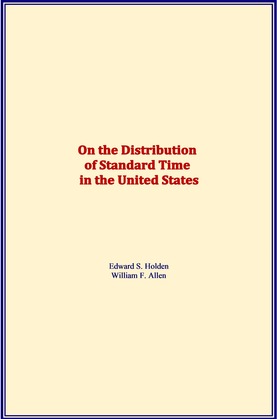 On the Distribution of Standard Time in the United States

This book treats of the problem of the Distribution of Standard Time in the United States.

“For the ordinary purposes of life in a state of society which is not yet complex, a very simple system of recording the lapse of time is sufficient. Sunrise and sunset are local phenomena, which from the earliest times forced themselves upon the attention of every one, and which throughout the early centuries sufficed for the division of time.

A further division of the duration of the day (as defined by the continuance of sunlight) was obtained by noting the time of noon, and there is no historic period known in which the method of obtaining a rough approximation to this instant by means of the shadow of a vertical rod or pillar was not understood.

Probably the observation of such a gnomon or style constituted the first step in astronomy of precision as distinguished from that astronomy in which numbers do not play the most important part. The instant so determined is technically called the instant of apparentnoon at any place, and it marks the moment when the sun is highest above the horizon and on the meridian.

Until within a hundred years this apparent time, that is the time marked by the angular distance of the sun from the meridian of any place, was the system universally adopted..."

The time of mean noon differs from the instant of apparent noon no less than sixteen minutes at certain times in the year, being times in advance of it, and sometimes later; so that the moment when the sun was highest at a certain place does not mark a determinate instant unless the day of the year is also given.

It is necessary to remember this, and to insist somewhat upon it, as the idea that the local noon as determined by clocks and watches is a sort of naturally determined epoch is widely spread, while the fact is that it is an artificial epoch, which can only be fixed by a somewhat difficult astronomical observation and a subsequent computation. The farm-laborer who eats his dinner in the field at the time that shadows cast by the sun point north and south is the victim of his own ignorance, as he sometimes anticipates the noon of watches and clocks by more than a quarter of an hour, and is sometimes equally in retard. The improvement of the balance-watch upon the clepsydra or the hour-glass and other early time-keepers caused the change to be made from apparent to mean time, and the increasing requirements of a complex civilization demand more and more attention to the keeping of accurate standard time. One of the most important functions of observatories is the determination of such a standard of time, and if this were their sole function the expense of maintaining them would be fully repaid.

If the standard time is important to the man of business in making his appointments and regulating his affairs, to the traveler in providing railways with a correct time by which to govern the movements of trains, and in general to every citizen in his daily occupations on land, it is vital to the successful and safe navigation of the ocean. Every ship that sails for a foreign port must before her departure know the correction of her chronometers to Greenwich time (that is, the number of seconds they are fast or slow on that time), and besides this their rate (or the number of seconds they daily gain or lose). Provided with good chronometers and with these data well determined, a ship sails from her port with the power of determining on any day her position on the earth's surface..."