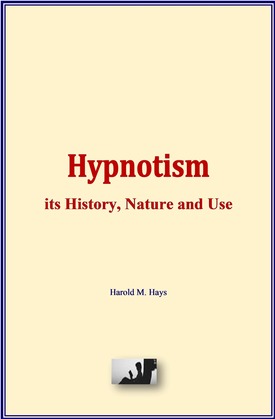 Hypnotism: its History, Nature and Use

History of Hypnotis, its Nature and Use.

It is perhaps unnecessary to state that the word hypnotism brings to the mind of the average person timid recollections of many criminal acts. That is because few people hear of hypnotism in its proper sphere. It is clothed with the garb of shame; it is surrounded with all the horror belonging to the age of witchcraft. Newspapers delight in depicting its bad sides, in painting to the world the crimes that have been committed under its influence, the fearful results of its all powerful spell. To most it means a giving up of one's will to another who is superior, the crushing of one's entity by the power of another, the total abstinence of individual self-control, the entire weakening of one's higher intelligence. Vivid imagination supplies the result—suffering, hardship, labor and total subservience.

The question arises, 'Why should hypnotism have been thus derided?' Simply and plainly because the ignorance of people in general has given it no opportunity to show its good sides. Unfortunately people are always looking for the 'eternal gullible' and are not satisfied until they get a taste of it. And as hypnotism was first practised solely and is now practised mostly by men who have made the world their dupes, the world has had to suffer in the advancement of hypnotism on a scientific basis...