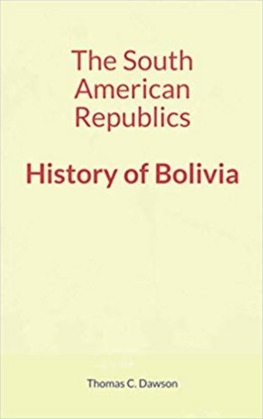 From its Conquest to the Independence, this book deals with the History of Bolivia.

"Between latitudes fourteen and a half and twenty-three and a half, the mighty Andean chain is massed into a plateau five hundred miles wide, over twelve thousand feet high, and interspersed with a complex system of mountains and ridges, parallel, transverse, and interlaced. Geographers estimate that this central portion of the Andean system contains nearly five hundred thousand cubic miles of matter above sea level, and that it would, cover the entire area of South America to an average depth of four hundred feet. The great ranges which stretch north to the Caribbean and south to Cape Horn are mere arms of this massive elevation of the earth, the highest and largest in the new world. Within a few miles of the coast rises a lofty and continuous range of mountains which can be scaled only over a few passes, none of which fall far below fourteen thousand feet. From the top a vast plateau stretches to the lofty chain which forms the inland rim of the Andean massif. This plateau is Bolivia...The country was in early days simply a portion of the empire of the Incas of Peru. After the conquest of Peru by the Spaniards in the 16th century the natives were subjected to much tyranny and oppression, though it must in fairness be said that much of it was carried out in defiance of the efforts and the wishes of the Spanish home government, whose legislative efforts to protect the Indians from serfdom and ill-usage met with scant respect at the hands of the distant settlers and mine-owners, who bid defiance to the humane and protective regulations of the council of the Indies, and treated the unhappy natives little better than beasts of burden.... "