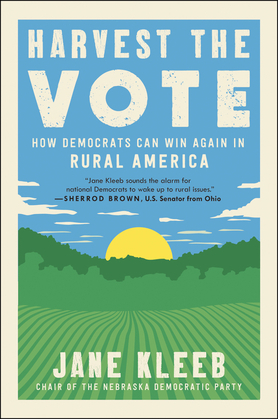 The Democratic Party has lost an entire generation of rural voters. By focusing the majority of their message and resources on urban and coastal voters, Democrats have sacrificed entire regions of the country where there is more common ground and shared values than what appears on the surface.

In Harvest the Vote, Jane Kleeb, chair of Nebraska’s Democratic Party and founder of Bold Nebraska, brings us a lively and sweeping argument for why the Democrats shouldn’t turn away from rural America. As a party leader and longtime activist, Kleeb speaks from experience. She’s been fighting the national party for more resources and building a grassroots movement to flex the power of a voting bloc that has long been ignored and forgotten.

Kleeb persuasively argues that the hottest issues of the day can be solved hand in hand with rural people. On climate change, Kleeb shows that the vast spaces of rural America can be used to enact clean energy innovations. And issues of eminent domain and corporate overreach will galvanize unlikely alliances of family farmers, ranchers, small business owners, progressives, and tribal leaders, much as they did when she helped fight the Keystone XL pipeline. The hot-button issues of guns and abortion that the Republican Party uses to wedge voters against one another can be bridged by putting a megaphone next to issues critical to rural communities.

Written with a fiery voice and commonsense solutions, Harvest the Vote is both a call to action and a much-needed balm for a highly divided nation.