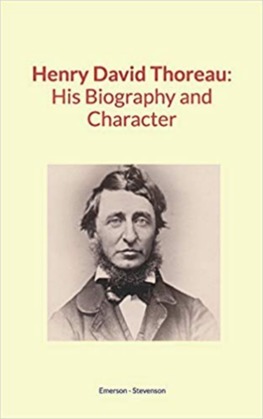 pHenry David Thoreau was the last male descendant of a French ancestor who came to this country from the Isle of Guernsey. His character exhibited occasional traits drawn from this blood in singular combination with a very strong Saxon genius. He was born in Concord, Massachusetts, on the 12th of July, 1817. He was graduated at Harvard College in 1837, but without any literary distinction. An iconoclast in literature, he seldom thanked colleges for their service to him, holding them in small esteem, whilst yet his debt to them was important. After leaving the University, he joined his brother in teaching a private school, which he soon renounced. His father was a manufacturer of lead-pencils, and Henry applied himself for a time to this craft, believing he could make a better pencil than was then in use. After completing his experiments, he exhibited his work to chemists and artists in Boston, and having obtained their certificates to its excellence and to its equality with the best London manufacture, he returned home contented. His friends congratulated him that he had now opened his way to fortune. But he replied, that he should never make another pencil. "Why should I? I would not do again what I have done once." He resumed his endless walks and miscellaneous studies, making every day some new acquaintance with Nature, though as yet never speaking of zoölogy or botany, since, though very studious of natural facts, he was incurious of technical and textual science... /p
p /p