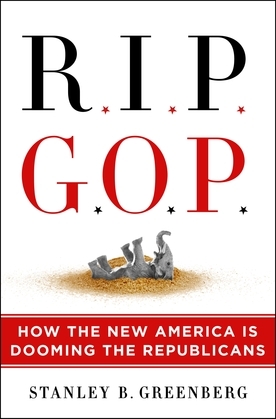 A leading pollster and adviser to America?s most important political figures explains why the Republicans will crash in 2020.

For decades the GOP has seen itself in an uncompromising struggle against a New America that is increasingly secular, racially diverse, and fueled by immigration. It has fought non-traditional family structures, ripped huge holes in the social safety net, tried to stop women from being independent, and pitted aging rural Evangelicals against the younger, more dynamic cities.

Since the 2010 election put the Tea Party in control of the GOP, the party has condemned America to years of fury, polarization and broken government. The election of Donald Trump enabled the Republicans to make things even worse. All seemed lost.

But the Republicans have set themselves up for a shattering defeat.

In RIP GOP, Stanley Greenberg argues that the 2016 election hurried the party?s imminent demise. Using amazing insights from his focus groups with real people and surprising revelations from his own polls, Greenberg shows why the GOP is losing its defining battle. He explores why the 2018 election, when the New America fought back, was no fluke. And he predicts that in 2020 the party of Lincoln will be left to the survivors, opening America up to a new era of renewal and progress.