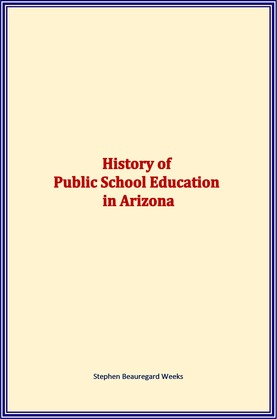 The territory of the present State of Arizona is embraced within 31° 20? and 37° north latitude and between 109° 02? and 114° 45? west longitude. It covers an area of 113,956 square miles, of which 146 miles are water surface. The part north of the Gila River came into the possession of the United States under the treaty of Guadalupe Hidalgo in 1848, and that south of the Gila as a part of the Gadsden Purchase of 1854. Arizona was at first included in the Territory of New Mexico, and the census of 1860 gives to Arizona County, N. Mex., a total of 1,681 families, representing 6,482 free individuals...

Prior to the American occupation all the inhabitants of this region were Mexicans and Indians; and all the educational institutions, general in character and purpose, proposed in the past for this country by the Spanish Government had failed of realization. Thus early as 1777–1789 the founding, of a missionary college, perhaps at El Paso, was ordered by the King and the Pope, but nothing was accomplished. About the same time industrial education was proposed as a remedy for the ills of the country, but this, too, came to naught, and while educational reforms were demanded by Pedro Bautista Pino, the New Mexican representative in the Spanish Cortes of 1812, his efforts were without results...