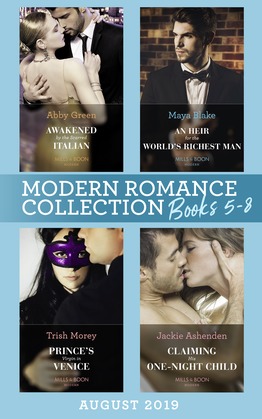 Awakened by the Scarred Italian by Abby Green

The brooding Italian’s returned…
To finally make her his!

Two years after their last heartbreaking meeting, ruthless Ciro Sant’Angelo bursts back into Lara Templeton’s life with a demand. His former fiancée will fulfill her promise and become his wife! Their intense fire has never died, and his caress awakens innocent Lara to unimaginable pleasures. Could their convenient marriage be their redemption?

An Heir for the World's Richest Man by Maya Blake

For his latest deal, self-made billionaire Joao Oliviera’s needs his right-hand woman, Saffron Everhart. But the undeniable tension between them is higher than ever since they finally surrendered to a one-off, emotionally-charged night together. And now Saffron is pregnant!

The instant chemistry between shy hotel maid Rosa and Prince Vittorio soon leads to a scorching encounter at Venice’s most exclusive Carnival ball ! It’s meant to be Vittorio’s last taste of pleasure before duty demands he marry and provide an heir. But will one night with Rosa be enough…?

He’s the billionaire she loves to hate…
And now she’s having his baby!

When notorious Italian playboy Dante Cardinali is confronted by Stella Montefiore, vowing to settle a family vendetta, he’s intrigued by her bravery… and enticed by their passionate attraction! It explodes into an intense and sizzling encounter—that leaves innocent Stella shockingly pregnant! Now to claim his heir, Dante must marry this dangerously alluring woman…