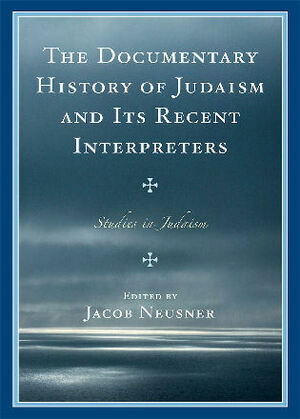 The Documentary History of Judaism and Its Recent Interpreters

The result for the history of Judaism of a documentary reading of the Rabbinic canonical sources illustrates the working of that hypothesis. It is the first major outcome of that hypothesis, but there are other implications, and a variety of new problems emerge from time to time as the work proceeds. In the recent past, Neusner has continued to explore special problems of the documentary hypothesis of the Rabbinic canon. At the same time, Neusner notes, others join in the discussion that have produced important and ambitious analyses of the thesis and its implications. Here, Neuser has collected some of the more ambitious ventures into the hypothesis and its current recapitulations. Neusner begins with the article written by Professor William Scott Green for the Encyclopaedia Judaica second edition, as Green places the documentary hypothesis into the context of Neusner's entire oeuvre. Neuser then reproduces what he regards as the single most successful venture of the documentary hypothesis, contrasting between the Mishnah's and the Talmuds' programs for the social order of Israel, the doctrines of economics, politics, and philosophy set forth in those documents, respectively. Then come the two foci of discourse: Halakhah or normative law and Aggadah or normative theology. Professors Bernard Jackson of the University of Manchester, England and Mayer Gruber of Ben Gurion University of the Negev treat the Halakhic program that Neusner has devised, and Kevin Edgecomb of the University of California, Berkeley, has produced a remarkable summary of the theological system Neusner discerns in the Aggadic documents. Neusner concludes with a review of a book by a critic of the documentary hypothesis.