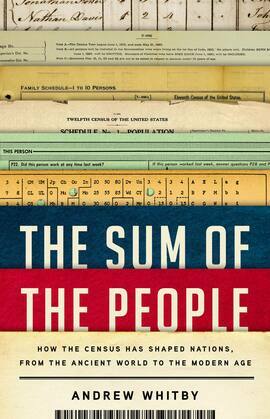 The Sum of the People

In April 2020, the United States will embark on what has been called "the largest peacetime mobilization in American history": the decennial population census. It is part of a long, if uneven, tradition of counting people that extends back at least three millennia. Tracing the remarkable history of the census from ancient China, through the Roman Empire, revolutionary America, and Nazi-occupied Europe, right up to today's Supreme Court battles, The Sum of the People shows how the impulse to count ourselves is universal, how the census has evolved with time, and how it has always profoundly shaped the societies we have built.

As data scientist Andrew Whitby reveals, the earliest censuses in ancient China and the Fertile Crescent had purely extractive aims: taxation and conscription. Later, as Enlightenment-era governments began to answer to citizens, the census was reinvented to support political representation and to delimit the boundaries of new nation-states. As the role of government grew through the nineteenth and twentieth centuries, censuses became more complex and scientific. Census bureaus spun out dozens of other surveys, which formed the statistical foundation of modern, technocratic, data-driven government. For the first time, counting every person on the planet became a real possibility-and debates about who was counted, who was not, and what questions they were asked became the subject of intense political controversy in places from Australia to South Africa to the United States. The census at its best is a marvel of democracy, but it has at times been an instrument of exclusion, and, as in the case of Nazi Germany, a tool of tyranny and genocide.

Today, governments and businesses alike now routinely collect "big data" that would have been unimaginable just a few decades ago, prompting fears similar to those the census once provoked and leading to some to suggest that traditional censuses will soon be obsolete. The Sum of the People closes by making the case that, for all its past faults, the census can be an alternative and an antidote to a future of constant, invasive surveillance.