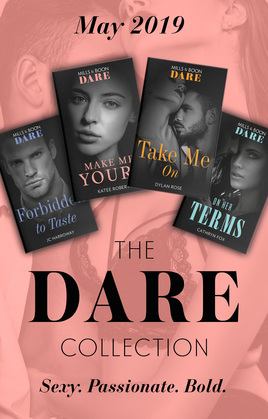 The Dare Collection May 2019: Forbidden to Taste (Billionaire Bachelors) / On Her Terms / Make Me Yours / Take Me On

Forbidden to Taste by JC Harroway

The sweetest pleasures…are the most dangerous!

Drake Faulkner would have given anything to marry Kenzie Porter, but his Army buddy best friend Sam got there first. Drake’s avoided Kenzie in the years since Sam was killed in action—he doesn’t trust himself around her. But when she turns up begging for a job at his hotel, Drake struggles to resist temptation. Their powerful chemistry feels risky, but that only makes it harder to stay away…

As a lawyer who picks up the pieces of broken relationships, my number one dating rule is: no emotions. Until I come face-to-face with Luca Marino at a wedding. The aristocratic Italian sex-god humiliated me years ago—and doesn’t recognize me after my transformation from the shy, overweight girl I once was. Now’s my chance for deliciously hot payback, but it means breaking my golden rule…

Make Me Yours by Katee Robert

One hot night with a stranger…leads to something very unexpected!

Three months ago, fitness instructor Becka Baudin gave me the most satisfying night of my life…and walked away. Now the wildest, sexiest woman I’ve ever met is pregnant with my child. Despite persuading her to move into my Manhattan penthouse, she wants nothing to do with my upscale CEO life. She may let me back into her bed, but getting into her guarded heart is a different ball game!

Take Me On by Dylan Rose

Kenzie Fox is ready to sell her stake in a rum distillery, until she discovers the buyer is Antonio Navedo, the arrogant stranger she’s just shared a steamy night with. Furious, she changes her mind and proposes a sexy wager instead: if she can turn the business around, she gets the distillery. If she fails he gets her shares – and anything he wants in the bedroom…including her heart.