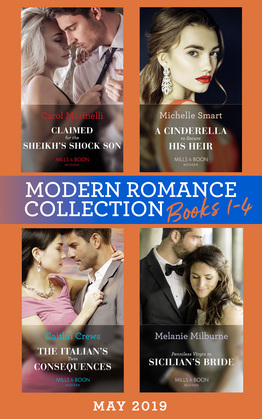 Modern Romance May 2019: Books 1-4: Claimed for the Sheikh's Shock Son (Secret Heirs of Billionaires) / A Cinderella to Secure His Heir / The Italian's Twin Consequences / Penniless Virgin to Sicilian's Bride

Claimed for the Sheikh’s Shock Son by Carol Marinelli

Desert prince Khalid never loses control… With one exception: his illicit night of passion with captivating dancer Aubrey. Khalid was shocked to discover Aubrey was a virgin. Yet after returning to his kingdom, nothing compares to the bombshell that she’s had his secret child! Claiming his son is non-negotiable for this proud prince… But claiming Aubrey will prove a much more delicious challenge!

A Cinderella to Secure His Heir by Michelle Smart

Alessio Palvetti will do anything to bring his young nephew into the family business. To secure his heir, he’ll use his incredible chemistry with the boy’s legal guardian, Beth Hardingstone, and command her to marry him! For Alessio the Palvetti empire always comes first, but all orphaned Beth has ever wanted is to matter to someone. Will their intensely passionate marriage be enough for this innocent Cinderella?

The only thing standing between CEO Matteo Combe and his company is Dr Sarina Fellows’s character assessment. She’s dealt with arrogant men like Matteo before and won’t be intimidated. But untouched Sarina isn’t prepared for the intense fire Matteo ignites in her! Succumbing to indescribable pleasure changes everything between them. Especially when she discovers she’s pregnant—with the powerful Italian’s twins!

Sicilian billionaire Gabriel Salvetti offers a simple exchange— for her hand in marriage he’ll save Francesca Mancini’s ancestral home. Penniless Frankie has the aristocratic name Gabriel needs to redeem his family’s notorious reputation. And their blatant physical attraction can only sweeten the deal. But when he discovers his convenient bride is a secret virgin, one taste is enough to make Gabriel crave his wife—forever!