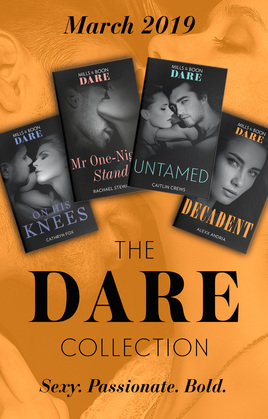 Buttons are made to be undone

One wicked touch at a time…

Self-made businesswoman Lucinda Graves is determined to add a tropical hotel to her company’s empire. Devastatingly handsome owner Jason Kaoki is willing to negotiate—but only if Lucinda rises to the challenges he sets! Lucinda passes every test, but as each dare grows hotter and wilder than the last, will she be able to keep her eyes on the prize?

Just think of the possibilities…

The second she sees Mr. Oh-So-Delicious, Jennifer Hayes knows she needs one night of crazy. No names, no strings, no rules. Except that Jennifer's naughty one-nighter is actually Marcus Wright, her new business partner! Now they're mixing business with all kinds of pleasure. But when it comes to falling in love, her sexy Mr. Wright is either Mr. Wrong, or the best mistake of her life…

On His Knees by Cathryn Fox

He’s out to expose her…

But he’s baring it all!

Gorgeous Summer Love is after his grandfather’s billions. And New York lawyer Tate Carson will stop at nothing to prove she’s a fraud. Not even following her to glamorous St. Moritz. But he never imagined falling under her sexy spell… And now, from his luxe chalet to her penthouse suite, to the snow-crusted Swiss Alps slopes, she’s exposing his every carnal desire, and maybe even his heart…

All she wants is a taste…

But can she resist wanting more?

Alessandra Baroni has had her fill of American men. So arrogant. Like handsome-as-the-devil Dante Donato, who's determined to buy back the winery his family once owned—even if it means playing deliciously dirty! But Dante has met his match in Alessandra. Now the stakes are getting wicked…and with this much heat even the coldest of hearts is in danger of falling hard.