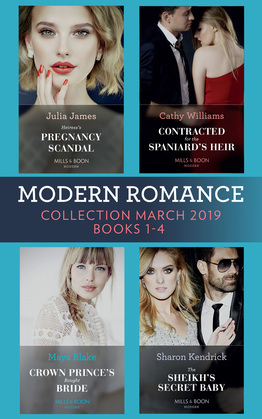 Unexpectedly inheriting the throne is shocking enough. But when an encounter with former lover Jasmine Jones is interrupted by the wail of a baby, Sheikh Zuhal also discovers he has a son! Their secret affair was intensely passionate—and dangerously overwhelming. To claim his child, Zuhal must get Jazz down the palace aisle. And he’s not above using seduction to make her his wife!

While on a business trip, dutiful heiress Francesca Ristori is stunned to be swept away with her desire for Italian tycoon Nic Falcone! Nic is unlike any man she’s ever met before and his searing touch thrills and excites her beyond words. But Francesca believes it can only be temporary—she must return to her aristocratic life. Until she learns she’s pregnant with the billionaire’s baby…!

Contracted for the Spaniard’s Heir by Cathy Williams

Brooding Spaniard Luca Ross has the world at his feet. But left to care for his orphaned godson, the heir to his unimaginable wealth, he’s completely out of his depth! Then bubbly, innocent Ellie Edwards stumbles into his life, and she’s exactly what Luca’s been looking for. Contracting her to look after the young child is easy—denying their fierce attraction is infinitely more challenging…

Before taking the throne, Crown Prince Remirez Montegova has to do two things: find a wife, and resolve the royal scandal unintentionally triggered by stunning waitress Maddie Myers. Remi solves both problems by striking a deal with Maddie that she become his Queen! But his innocent new bride awakens a passion he’d thought long-buried. And after their scorching wedding night, suddenly their arrangement feels anything but convenient…