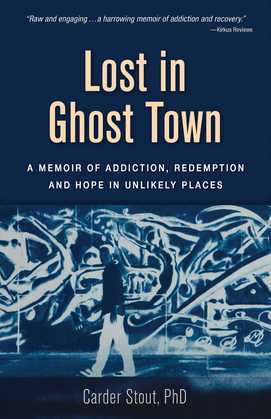 Psychologist to the Hollywood elite Dr. Carder Stout delivers a page-turning memoir about his fall from grace into the gritty underbelly of crack addiction, running drugs for the Shoreline Crips, surviving homelessness, escaping a murder plot, and finding redemption in the most unlikely of places.

Dr. Carder Stout’s clientele includes Oscar-, Golden Globe-, Emmy-, Tony- and Grammy-winners, bestselling authors, and billionaires. He may not be able to share their dark secrets, but for the first time, everyone will know his.

At the age of thirty-four, Carder would have gladly pawned the silver spoon he was born choking on for a rock of crack. His downfall was as swift as his privilege was vast…or had he been falling all along?

Raised in a Georgetown mansion and educated at exclusive institutions, Carder ran with a crowd of movers, shakers, and future Oscar-winners in New York City. But words like “promise” and “potential” are meaningless in the face of serious addiction. Lost years and a stint in rehab later, when Carder was a dirty, broke, soon-to-be-homeless crackhead wandering the streets of Venice, California. His lucky break came thanks to his old Ford Taurus: he lands a job of driving for a philosophical drug czar with whom he finds friendship and self-worth as he helps deliver quality product to LA’s drug enthusiasts, from trust-fund kids, gang affiliates, trophy wives, hip-hop producers, and Russian pimps. But even his loyalty and protection can’t save Carder from the peril of the streets--or the eventual contract on his life.

From a youth of affluence to the hit the Shoreline Crips put on his life, Carder delves deep into life on the streets. Lost in Ghost Town is a riveting, raw, and heartfelt look at the power of addiction, the beauty of redemption, and finding truth somewhere in between.