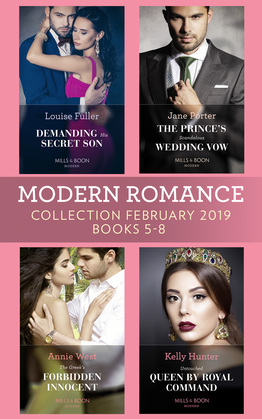 By the time Theodora realised she was pregnant, her turbulent marriage to Greek hotel magnate Aristotle Leonidas was over. Since then she’s zealously guarded her secret… Until Aristotle discovers his heir and demands Teddie marry him—again! But, even with their chemistry as red-hot as ever, Teddie wants more this time. Now, to claim his son, Aristo must reclaim his wife!

When sweet scientist Josephine rescues a drowning stranger she’s captivated by his devastating good looks and charm. Alexander doesn’t remember who he is, but the desire in his eyes sweeps innocent Josephine into an intensely passionate journey… Until it’s revealed he’s Prince Alexander, heir to the throne of Aargau… Now the threat of scandal means this shy Cinderella must become a royal bride!

While helping her friend escape an arranged marriage dutiful Princess Mina finds herself captive on enigmatic Alexei Katsaros’s luxurious private island! Mina must convince Alexei that she’s his future bride—but she doesn’t expect their scorching chemistry to be so deliciously overwhelming… And after a night in the Greek’s bed suddenly there’s more at stake than just Mina’s hidden identity—her heart’s at Alexei’s mercy too!

King Augustus is shocked when his country delivers him a courtesan. The only way to set her free is to marry someone else! But Sera’s surprising innocence and undisguised yearning for him is temptation itself, pushing Augustus’s legendary self-control to the limits. Because Augustus knows that if he dares give in to his attraction he won’t rest until Sera becomes his queen!